Faith Is Believing (Unison with piano and optional descant, flute, and percussion) Choristers Guild, #CGA1641. The text is based on the definition of faith in Hebrews 11:1 and the idea that it is a gift to be nurtured and a call to be followed. It is set to a lively, syncopated tune in a "pop" quasi-calypso style that is fun for all ages to sing. Choristers Guild uploaded a performance of the anthem here!  Copies can be ordered from J.W. Pepper (www.jwpepper.com). 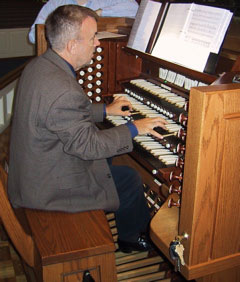 John retired from teaching after twenty-six years with the Montgomery County, Maryland Public School System. During his tenure with the school system, he taught general music for twenty-one years at the elementary level and five years at the secondary level, and worked extensively with choruses at both levels. He received the Broom Award for Excellence awarded by his home county for his work in composition for children.

John served Warner Memorial Presbyterian Church in Kensington, Maryland for forty-three years as Organist and Director of Music. He oversaw three choral groups and two bell choirs. Over eighty members of the congregation participated in the music groups of the church.  He retired from that position at the end of July, 2013. In the fall of 2013 he began a four-month interim position as organist and director of music at Rockville United Church, Rockville, MD. After serving as interim organist and director of music at First Congregational Church (United Church of Christ) in downtown Washington, D.C. in 2014, John was called to a permanent position there. John retired from this church on July 1, 2021, but will continue teaching piano and composing from his home in Silver Spring, Maryland.

John's compositions are found in the catalogues of over ten nation-wide publishers, and they have been heard on national television in both the United States and Great Britain. He presently has over 150 anthems for children, youth and adults in print. He also wrote songs for both Silver Burdette and Macmillan publishing houses for their 1988 school music series.  More recently his compositions have also been geared toward virtuoso solo artists, both vocal and instrumental.

Over the years John has served as clinician for children’s or youth choirs at national conferences held by Presbyterians, Reformed Presbyterians, American Baptists, Methodists, Lutherans, and Disciples of Christ. His work as a choral clinician has taken him to over 50 children's choir festivals in the last 15 years. He has taught Children's Choir Techniques at the Church Music Institute held by the Shenandoah Conservatory of Music.  In recent years he has been teaching “So You Think You Can’t Sing” courses at the Strathmore Center in Bethesda, Maryland, helping adults to match pitch, sing in unison, and begin to sing in harmony.

John has served both on the Choristers Guild Board of Directors and The Board of Directors of the Presbyterian Association of Musicians. He was a consultant for the Exploring Faith Sunday school curriculum published by the United Methodist Publishing House, supporting the writing teams and providing music resources for the curriculum. Before that he edited the junior level of Abingdon's graded choir curriculum, Church Music for Children. He has worked as a free lance writer for a number of periodicals, including Church Music Workshop, a journal published by Abingdon Press, and The Chorister, the journal for the Choristers Guild of Garland, Texas

With members of a consultant group, New Paths, John co-authored two books on incorporating the arts into Christian Education programs: Something Old, Something New: Hymns to Sing and Things to Do, Volumes I (Who Is Jesus?) and II (Exploring the Christian Year), published by Abingdon Press.

John has collaborated with Mary in producing three collections of new hymns, Come Away With Me and Time Now to Gather, published by Abingdon Press, and The Song Lingers On, published by Zimbel Press. A fourth collection, Faith That Lets Us Sing, will be published by Wayne Leupold Editions in 2016. Some of these hymns and others have been included in the United Methodist hymnal supplement, The Faith We Sing, and the Presbyterian supplement, Sing the Faith.  Others appear in Voices United (United Church of Canada), Hymns of Heritage and Hope (Advent Christian), Lift Up Your Hearts (Christian Reformed/Reformed Church of America), Singing the New Testament (Christian Reformed), Voices Found (Episcopal), and Community of Christ Sings (Community of Christ). A third collection, Sing the Stories of God’s NEW People: Twenty-five More Songs for the Youngest Singers, was published in 2016. 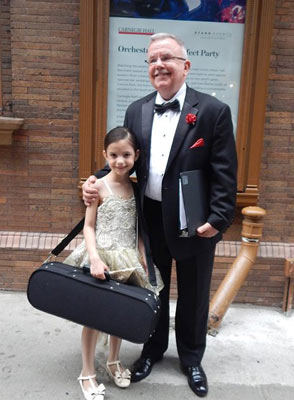 John and his granddaughter Ava at Carnegie Hall 2016

Let us come into God's presence with thanksgiving; let us make a joyful noise to God with songs of praise!