Our Faith That Lets Us Sing: Fifty New Hymns and Short Worship Songs was published in 2017 by Wayne Leupold Editions.  This fourth collection of new texts and tunes includes hymns and songs for all ages to sing with faith and hope of God’s love in troubled times, not just in congregational worship but whenever the congregation gathers.  The texts are scripture-based, written in contemporary language and standard poetic meters. The singable tunes are well-crafted and easily learned. Indexes and notes on the background of each hymn and song provide useful information for worship planners.

A Blessing for Christmas Eve
May you hear the angels singing once again this holy night.
May you hurry with the shepherds to behold the wondrous sight
of the Christ who lies, a baby, in a manger filled with straw.
May you kneel down with the shepherds, know their wonder and their awe.

May you go and tell your neighbors that the Promised One has come
For the poor, the sick, and homeless, for the stranger, everyone!
As you celebrate together this amazing gift of grace,
May you follow Christ’s example and the way of love embrace.*
*From our fourth collection of hymns, Faith That Lets Us Sing, Wayne Leupold Editions, 2017

2020, A Surreal Year.
Mary had carpal tunnel surgery on both wrists in mid-February and had to stop playing in the church handbell choir. By the time she was recovered, she had started self-isolating because of the Covid-19 pandemic, so her participation in church worship and music has been singing along with the choir director as he solos on all the hymns in the live-streamed Sunday worship service. She has used her time at home to work on several writing projects and research on her mother’s colonial ancestors.

John has continued as organist and director of music at First Congregational UCC in Washington, DC, using all his creativity and energy to prepare choral and instrumental offerings for the church’s live-streamed recorded Sunday services. He has been rehearsing a “virtual” choir by sending members recorded parts and accompaniments so they can record and return their parts for a technician to combine into a file to drop into each Sunday service.

John became the proud grandfather of twin boys, Massimo and Hugo, born to Todd and El Horman in March.  The boys are thriving and their delighted parents are surviving just fine. John has managed to visit the family in New Jersey several times.

2020 Annual Conference of the Hymn Society.  Due to the pandemic, this in-person event scheduled for Atlanta, Georgia, July 12-16, was canceled in favor of a “virtual” event for those who registered online.  John still led the Tune-Writers Colloquium with an excellent group of online participants, and the session was available to viewers online ahead of time and during the conference.  Mary had looked forward to meeting Miriam Therese Winter after singing so many of the songs wrote for her Medical Mission Sisters group, but instead enjoyed watching her Zoom lecture on “Why We Sing: My Song in Our Quantum Universe” during the conference.  The 2021 conference, scheduled for July 11-15 at Calvin University in Grand Rapids, Michigan, will be in-person but there will be a digital component for those unable to travel there.  Watch for details on www.thehymnsociety.org after January 1.

“Beloved: A Celebration of Women in Ministry” was the theme of a hymn festival celebrating the 50th anniversary of the ordination of women in the Evangelical Lutheran Church of America, held at First Lutheran Church in St Peter, Minnesota, on August 9, 2020.  Mary’s text, “God Has Called Us through the Prophets,” from Faith That Let Us Sing, sung to ABBOTS’ LEIGH, was the opening hymn.  Other writers with Hymn Society connections whose texts were sung or read included: Mary Louise Bringle, Carolyn Winfrey Gillette, Sylvia Dunstan, Ruth Duck, Edith Sinclair Downing, Susan Palo Cherwien, and Mary R. Bittner. Emily Bruflat, the cantor of the church wrote the text and tune of the theme hymn.

John has written “Arioso” for his granddaughter, Ava Pakiam, a talented young violinist who has already been performing it on YouTube. His moderate to difficult arrangement of the piece for violin, viola, and cello will be published by Sleepy Puppy Press in a collection for young instrumentalists, but if you would like a copy now, contact him directly (johnhorman@comcast.net).

Hymns on YouTube
The Community of Christ has posted a piano recording of John’s tune along with Mary’s printed text for our hymn, “God of Every Generation” on YouTube. (The hymn is #361 in the hymnal, Community of Christ Sings.)
Another YouTube posting is our Communion hymn, “Time Now to Gather” sung by a male soloist to an organ accompaniment with the text printed on the screen. This hymn is #2265 in The Faith We Sing (Abingdon Press).
John’s anthem arrangement of our hymn “Come Away with Me” by the King of Kings Sanctuary Choir on Ash Wednesday in 2013 is also on YouTube.  It is #2202 in The Faith We Sing (Abingdon Press).
You can find these hymns on YouTube by googling the titles. 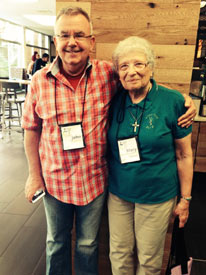 Let us come into God's presence with thanksgiving; let us make a joyful noise to God with songs of praise!